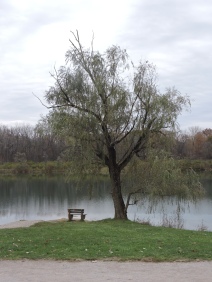 Have you ever had an experience where everything seemed to be going in one direction and suddenly everything was turned around and upside down?  The Creator has intervened to change the way our life is going.  The Creator is twisting things around to see if we are listening for the Cosmic Giggle.  This is the story of three people that experienced very different paths as they progressed towards their passing.

There was a man that lived here in Columbus that had end-stage lung cancer and heart disease.  The tumors in his lungs had grown to where the man couldn’t breathe.  His comment to his partner of many years was that she didn’t have to worry about his cancer because his heart would get him first.  He had a grasp of the Cosmic Giggle and appreciated the irony of his situation.

His doctor sent the man to a local hospital for treatment for the tumors.  The hospital looked at his overall condition and decided to treat his heart first so that he would be ready for the cancer treatment.  The treatments interacted and the man went into a coma.  The drugs made him agitated so they tied him to the bed.  He was dying and he was not happy doing it.  At that time, this hospital had no palliative care.  They treated you until you got better or you died.

I went to the hospice of another hospital and described the situation.  They sent a social worker to the man’s hospital and soon the man was transported to the hospice.  Everyone agreed that he would be dead in two or three days.  He wasn’t eating or taking fluids.  He was mostly in a coma.  The hospice ceased treatment for his cancer and heart problems, and treated his pain and anxiety with drugs.  He was dying and he didn’t know much of what was happening.

His family came in from the Midwest.  They were all Christians with a deep faith.  They held a prayer circle around the man’s bed asking that he recover.  I was invited to participate and it was a sincere prayer. The next morning, he woke up from the coma, ate a hearty breakfast, and was totally lucid.  In a week, they moved him out of the hospice because he had to be imminently passing to stay there.  He lived for about six more weeks before going back to the hospice and passing in less than a day.

The Cosmic Giggle is that one of the top hospitals in the United States was killing this guy, and a family prayer circle saved him for another six weeks of life.  Somewhere out in the Universe, the Creator was having a Cosmic Giggle.

After my father passed, my partner and I would go to visit my mother in an assisted living facility.  She was wracked with pain from a back injury.  She had diabetes and the neuropathy in her nerve endings make her hurt from head to toe.  Her blood sugar was poorly controlled since my father’s passing.  She missed my dad that had been her companion for nearly 65 years.  As we were leaving the two women had a conversation.  My mother told my partner, “I pray every day for Jesus to take me to heaven, but He isn’t ready yet.”

Two days later, my mom was in the local hospital with a blood sugar of 26 and double pneumonia.  The hospital put her on IV antibiotics and oxygen and struggled to keep her blood sugar somewhere that wouldn’t kill her.  When they gave her enough painkillers to ease her pain, she was comatose.  When they withdrew the painkillers, she spent her time praying for Jesus to take her to heaven.  She stopped swallowing and didn’t eat for two days.  As a family, we were preparing ourselves for her passing.  Then she started to eat again.  Her mind became clearer.  She was too healthy to stay in the hospital.  She was sent back to her assisted living facility.

When my partner and I went to visit my mom again, mom told her that Jesus wasn’t ready yet.  I pointed out that perhaps Jesus was ready, but she wasn’t.  My mom grinned, as did the Creator.  Mom died on Thanksgiving Day.  She wanted to be reunited with dad, and her only words that day were to my dad.  Finally sat up and bed and said, “Art, I want to go right now”.  She got her wish that day, and the Creator giggled.

There are many cultures where people go to professional astrologers to plan their lives.  A friend got an astrology reading that included the statement that he would die at a certain age.  His family and friends didn’t realize that the closer he got to that age the astrologer predicted, the more he drank.  His wife returned to their home one day to find she could not wake him.  She called the squad.

The squad took him to a local satellite hospital.  His blood alcohol was 0.39, which can be fatal in itself.  They decided he had to be intubated to help him breathe.  In order to intubate him, they had to give him an anesthetic.  The combination of blood alcohol and the anesthetic caused his heart to stop beating and he died.  They used the shock paddles and restarted his heart, but he was in a coma.

After transporting him to another hospital, he was in the coma for seven days.  He came out of the coma with no permanent brain damage, no major liver damage, and a new lease on life.  The astrologer was correct that he died at the predicted age.  The Creator intervened and he is was brought back to life.  The sound of the Cosmic Giggle was heard again.

In these events, one man lived several more weeks after a prayer circle was held at his hospice, a woman delayed her passing because she wasn’t quite ready to go, and a man died at the time predicted by an astrologer and then he was returned to life.  The Cosmic Giggle is in play in each of our lives.  We say as spiritualists that all things work for the best.  If we can hear the Cosmic Giggle in our hearts, we will know that things do truly work for the best.  The Creator has a weird sense of humor